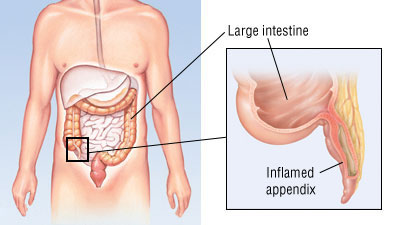 Appendicitis can often be mistaken for a normal stomach ache. Here is some more information about this condition. Read carefully about its symptoms and treatments so that you can take necessary steps to prevent risk.

Stomach aches are part of every childhood. In most cases, they are associated with indigestion, irregular bowel movements, overeating, etc. These conditions can be cleared up with mild medication or will go away on its own after some time. Occasionally, a stomach ache may accompany other symptoms if your child is suffering from a food or water-borne disease like dysentery, jaundice, etc.

Appendicitis is another cause of stomach aches. Although it is extremely rare, this condition causes the most worry among parents. This is because it requires immediate medical attention. Therefore, it becomes necessary to know what its symptoms are. This way you can seek timely medical intervention for your child.

Appendicitis is a term given to an inflamed appendix. The appendix is a small organ present in the lower right side of the abdomen. It is attached to the large intestine and has an opening to the intestine, from its interiors. It has a finger-like appearance and is said to be a storage area for some beneficial intestinal bacteria.

What are its symptoms?

Appendicitis can strike an individual at any age though it is most common in people between the ages of eleven and twenty. In very rare cases, an infant may be affected. Appendicitis is not a hereditary condition either. However, some medical studies have demonstrated an increased incidence of appendicitis among male children whose family members have experienced the same condition earlier.

The most common symptom of appendicitis is stomach ache. However, the abdominal pain is confined to the area around the navel or in the lower right side of the abdomen. The pain also differs from other stomach aches, as it is not constant. The pain will usually come on and off. The intensity of the pain also ranges from a dull ache to a sharp, shooting pain.

In cases of appendicitis, the stomach ache is accompanied by a fever. This is because the body is trying to fight the infection. Other symptoms include loss of appetite, mild diarrheic, nausea, and vomiting. The affected individual may also urinate frequently or experience strong urges to do so. If the sufferer is an infant, a swollen or bloated stomach may also accompany the above symptoms.

What are the treatment options?

If appendicitis is not treated at an early stage, it leads to bursting of the inflamed appendix within 72 hours of the first symptoms appearing. Appendicitis is often difficult to diagnose because its symptoms are similar to those of most stomach related ailments. If a doctor suspects appendicitis, he will check the abdomen to determine the source of the pain. He will also order an X-ray of the chest and abdomen to check if the inflammation is spreading.

Once appendicitis is confirmed, the only way to treat it is by removing the inflamed appendix. This is via a surgery called as appendectomy. The patient is not allowed to consume any food or liquids before the surgery and is fed by means of an intravenous drip. Surgery involves making a small incision in the abdomen and removing the inflamed appendix. The surgical procedure and recovery time requires hospitalization for two to three days.

Appendicitis cannot be prevented. However, the key to minimizing its devastating effects is vigilance. If you suspect your child could be suffering from appendicitis, it is better to take her to hospital so that it can be checked out. How to Raise a Happy Child – 10 Effective Parenting Tips

How to Develop Growth Mindset in Kids